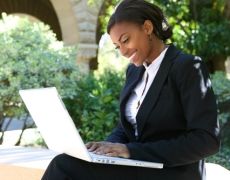 An MBA is designed to prepare students for roles in upper management, particularly in large corporations. The degree offers students the opportunity to study an array of areas of business management, from finance to statistics to human resources to marketing—every aspect of running a business is studied throughout the course of a typical MBA program. Students may wish to keep their studies general or they may tailor their focus toward a particular sector, such as the technology or healthcare industry.

If you are considering enrolling in an MBA program you may be looking ahead to the kinds of careers that you could pursue upon graduation. If you have ambitions to pursue a professional life in upper management, you could one day secure a role as a chief executive officer. These professionals essentially run an entire organization, working with a team of executives to make consequential decisions about a company’s branding, financing, strategies for growth and overall vision. The role carries a considerable amount of responsibility, as the success of an organization is ultimately the responsibility of the CEO.

Despite the pressures, a career as a CEO can be incredibly rewarding, both in terms of professional fulfilment and monetary compensation. After all, some of the world’s largest companies owe their success to their CEOs, many of whom began their illustrious careers by studying for an MBA degree.

To get an idea of where an MBA can take you, review the following list of renowned CEOs with MBAs:

Jeffrey L. Bewkes has enjoyed a prolific career in the entertainment industry, having entered the field after graduating with his MBA. Bewkes spent much of his career at the popular cable network HBO, joining the marketing department after graduation before climbing the ladder to the role of CEO. His success at HBO prompted a move to Time Warner in 2008, one of the world’s largest media operations. He remains the company’s CEO to this day, and according to Bloomberg, takes home an annual salary of over $15 million.

As outlined by Metro MBA, Joyce M. Roche has enjoyed an extensive career in the field of marketing, holding executive roles at cosmetics companies such as Avon and Revlon. She is perhaps most well known, however, for her role as CEO of Girls Inc., a nonprofit dedicated to the empowerment of young women. She held the role for a decade. Her career has also featured stints at major corporations such as AT&T and Dr. Pepper. Roche earned her MBA at Columbia University in New York City.

Phebe Novakovic currently serves as the CEO of General Dynamics, an international corporation that specializes in building products for the aerospace and defense industries. Novakovic has helmed the company for the past three years, having spent well over a decade in various positions within the organization. Novakovic earned her MBA and then pursued a career in the political arena, working with the CIA and Defense Department before moving into the private sector in the early 2000s. Novakovic’s yearly salary is substantial—Forbes reported that last year alone she made in excess of $20 million.

One of the nation’s largest cell phone networks, Verizon, is helmed by CEO Ivan G. Seidenberg. His career has primarily taken place in the communications industry, and Bloomberg noted that Seidenberg was instrumental in two highly successful mergers involving the communication company Bell Atlantic, where he served as CEO. He joined Verizon 14 years ago and currently takes home $31 million a year.

One of the nation’s most accomplished CEOs, Meg Whitman began her career after graduating from Harvard Business School, where she earned an MBA. As reported by Forbes, Whitman is renowned for her work as a CEO at international auctioning giant eBay, as well as for her stints in commanding positions at companies such as Dreamworks, Hasbro and Disney. She joined IT company Hewlett-Packard in 2011 as CEO, where she remains today. Whitman’s success has been considerably lucrative—she is reportedly worth around $2.2 billion, making her one of the nation’s richest women.

Perhaps the most recognizable name on the list, Tim Cook is renowned for his work as global IT powerhouse Apple’s CEO. As explained by Biography.com, Cook spent most of career in the technology industry, serving in roles at leading organizations such as IBM and Intelligent Electronics. Cook assumed the role of Apple’s CEO in 2011 after having worked at the company for over 13 years as Chief Operating Officer. Cook was so effective in the role of COO that the company began turning a profit within months of his arrival, after previously suffering notable financial losses. Most of Cook’s annual wage comes in forms other than salary—through stocks and investments. Cook’s success, can, in part, be credited to the knowledge he attained while he earned his MBA.

Currently serving as the CEO of financial services organization Ameriprise Financial, James M. Cracchiolo’s MBA set him up for a highly successful career in the financial sector, with credits on his resume including executive positions at international powerhouse firms like American Express. Cracchiolo joined Ameriprise Financial over a decade ago, and has overseen tremendous growth within the company. His current salary, according to Bloomberg, stands at a little over $10 million per year.

If you want to begin or expand a career that could lead you to the executive suite, consider enrolling in Villanova University’s online MBA program. Learning virtually can allow you to study at a time that suits you best, ensuring a healthier balance with your professional and personal commitments. Learn more about a program that could be your starting point on a journey to the C-Suite.

Effective steps to becoming a CEO

From the classroom to the C-suite: Five ways an MBA can prepare you for an executive role

Tips for negotiating compensation at the executive level